The recent space activities I'm writing and posting about provide solace during this government shutdown that has furloughed most NASA and related departments employees and contractors. 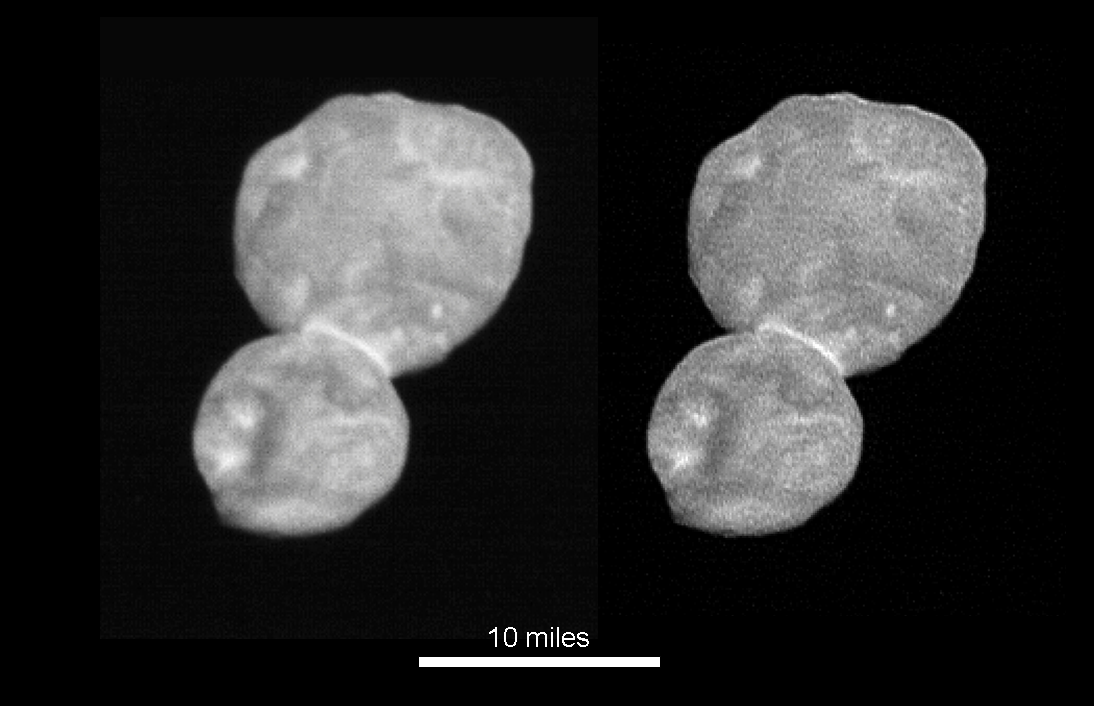 And Ultima and Thule, according to New Horizons' principal investigator Alan Stern at today's NASA press briefing, the informal names the team have given the two lobes of the red object out in the Kuiper Belt New Horizons spent New Year's encountering. The contact binary connected by a neck of material indicates two objects that came together and stuck sometime in the distant past when these kinds of interactions were leading elsewhere in the solar system to accretions that would eventually form the planets and their moons. 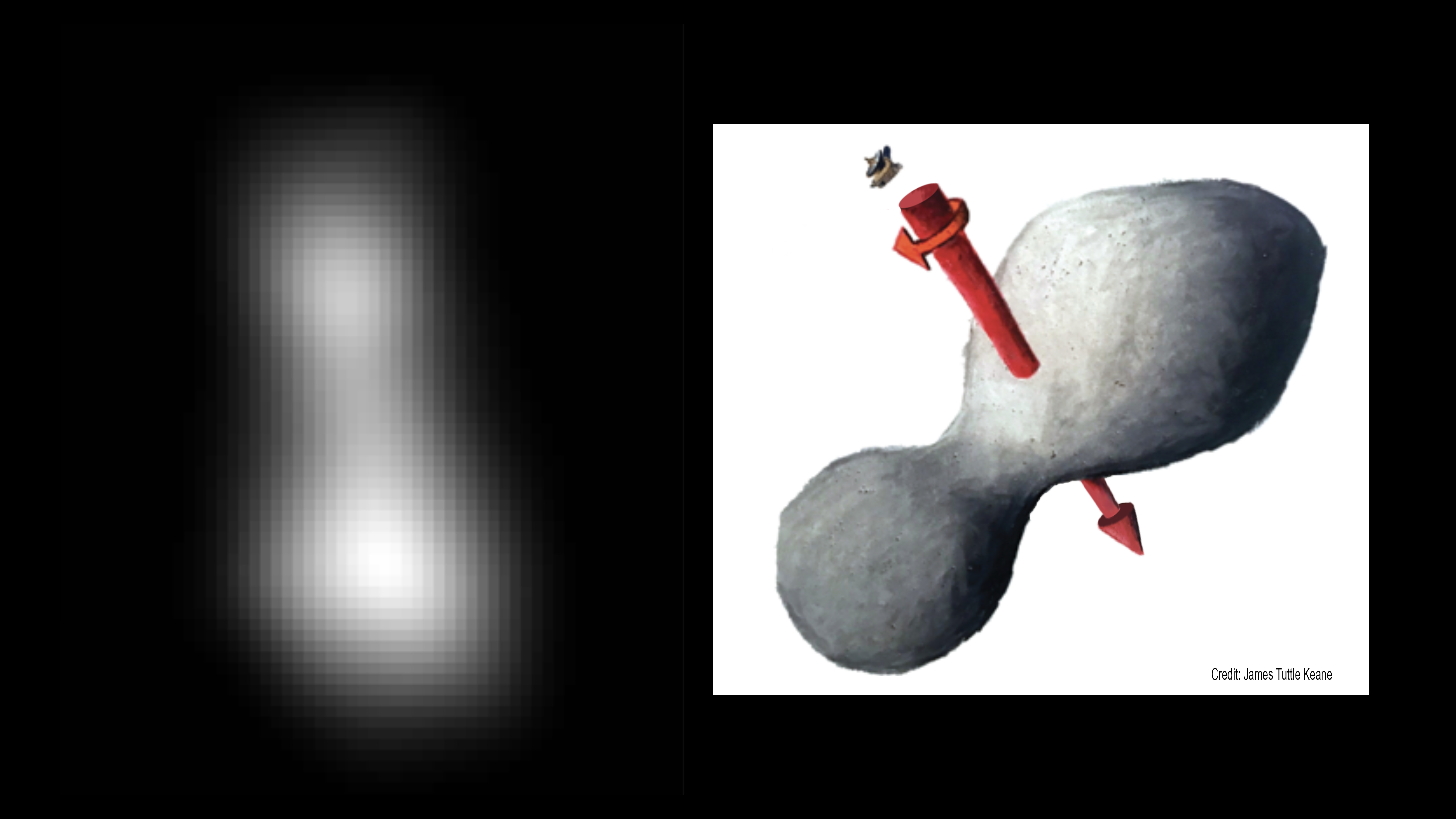 During a morning press briefing aired on NASA TV on New Year's Day 2019, New Horizons mission team leaders revealed the latest best image of Ultima Thule. Still a blur, the Kuiper Belt body's shape is more apparent in this latest image. Still unclear: are the two lobes connected or are they in fact two separate objects orbiting each other? The pole of the object was pointed toward the spacecraft, meaning Ultima Thule rotates from that perspective like a propellor. Artist and planetary scientist James Tuttle Keane has helped visualize this geometry in his illustration included next to the image.

6.5 billion kilometers (4 billion miles) away from where some Earthlings are celebrating New Year's Eve, NASA's New Horizons spacecraft is beginning its close flyby of a tiny world in the Kuiper Belt known as Ultima Thule (2014 MU69.)

As we do, the HiRISE team took a high resolution image of the InSight lander safe on the surface of Mars.

Consider what those of us can see in the night sky with healthy eyes, without any tools, far from city lights. Away from the dazzle of Sun's day the Moon at night is, of course, the brightest above all. The visible stars make an obvious and fixed, so it seems, pattern that fills the celestial hemisphere. … END_OF_DOCUMENT_TOKEN_TO_BE_REPLACED

[Post edited on Monday, June 22, 2015 to correct my misunderstanding about the provenance of the remarkable color image below.] Tonight I was browsing the latest raw images of Pluto and Charon taken by New Horizons today from only 27.7 million kilometers away and I realized that when you zoom in, Charon is just beginning … END_OF_DOCUMENT_TOKEN_TO_BE_REPLACED

This is it! Pluto is the last of the classical nine planets to be visited by a spacecraft from Earth. The New Horizons spacecraft will take close-up images and capture other useful data as it speeds by Pluto and its moons on July 14, 2015. This will complete the imaging grand tour of our solar system … END_OF_DOCUMENT_TOKEN_TO_BE_REPLACED

The Rosetta spacecraft has returned the first images from its flyby of the asteroid 21 Lutetia. The image on the right was taken while the spacecraft was approximately 80,000 kilometers away and it shows a lumpy, cratered world. Lutetia is approximately 100 km in diameter. It is the largest asteroid yet visited by a spacecraft. … END_OF_DOCUMENT_TOKEN_TO_BE_REPLACED

Hours after its successful flyby of "the jewel of the solar system", the robotic traveler Rosetta continues to return data from the encounter. From a point of light discovered in 1969 into a world of new vistas, here is Asteroid (2867) Šteins: At a press conference to announce preliminary results and to show the first … END_OF_DOCUMENT_TOKEN_TO_BE_REPLACED

Rosetta, the European Space Agency (ESA) spacecraft on its way to orbit and deploy a lander on a comet, is now approaching Asteroid (2867) Šteins. The flyby will bring the spacecraft within 800 km of Šteins on Friday evening, September 5, 2008. The ESA will provide a webcast about the event beginning on September 06, … END_OF_DOCUMENT_TOKEN_TO_BE_REPLACED

Venus is the Earth-that-could-have-been and the Earth-that-still-might-be.  Our so called sister planet orbits second from the Sun. Cloudy, hot, and unhospitable to life as we know it, Venus demonstrates as well as Mars why comparative planetary science can greatly improve understanding of our own planet. The greenhouse effect on Venus results in a poorly understood phenomena … END_OF_DOCUMENT_TOKEN_TO_BE_REPLACED

I will be speaking at the Sunday, September 7 meeting of the Humanist Society of Greater Phoenix about "Images of Mars and Interplanetary Science." This series of posts in preparation for the event will explore current spacecraft activities in planetary science. After the astronomy revolt that left the solar system with eight planets, four dwarf … END_OF_DOCUMENT_TOKEN_TO_BE_REPLACED

Image Credit: NASA/Johns Hopkins University Applied Physics Laboratory/Carnegie Institution of Washington - "MESSENGER’s First Look at Mercury’s Previously Unseen Side" A heavily cratered side of the planet Mercury never before seen has been revealed by the Mercury Surface, Space Environment, Geochemistry, and Ranging (MESSENGER) spacecraft. A single image was released by NASA this evening after … END_OF_DOCUMENT_TOKEN_TO_BE_REPLACED

Image Credit: NASA - "Plentiful Planetary System" - "This artist's concept shows four of the five planets that orbit 55 Cancri, a star much like our own." NASA announced during a press telecon this morning the discovery of a fifth planet in the 55 Cancri system. This sets a new record for exoplanets in a … END_OF_DOCUMENT_TOKEN_TO_BE_REPLACED

With the moon visible overhead, Armadillo Aerospace unsuccessfully attempted to win the Northrop Grumman Lunar Lander Challenge at the Wirefly X PRIZE Cup this weekend at Holloman Air Force Base. The only competitor of nine ready to go for the event, Armadillo Aerospace, led by John Carmack of Doom and Quake fame, experienced both successes … END_OF_DOCUMENT_TOKEN_TO_BE_REPLACED

A race to space is shaping up in the private industry and once a year the public is invited to see the latest breakthroughs, vehicles, and competitions intended to accelerate this progress. The Wirefly X PRIZE Cup was held October 26 through 28 at the Holloman Air Force Base near Alamogordo, New Mexico, USA. Combined … END_OF_DOCUMENT_TOKEN_TO_BE_REPLACED

The High Resolution Imaging Science Experiment (HiRISE) team today released a slew of new false color images of the surface of Mars to the public, the culmination of many months of software and automation development.